Democratic presidential nominee Joe Biden says if he's elected, he'll gather the nation's governors and ask them to urge residents in their states to wear masks in order to prevent the spread of the coronavirus pandemic.

Biden, speaking at a town hall Thursday night in Philadelphia hosted by ABC News, acknowledged that as president "you can't mandate a mask."

But the former vice president said that "you can go to every governor and get them all in a room, all 50 of them, as president and say 'ask people to wear a mask. Everybody knows."

Biden said that if some governors don't move to implement mask requirements, he said "then I go to every mayor, I go to every councilman, every local official, and say 'mandate the mask.'" 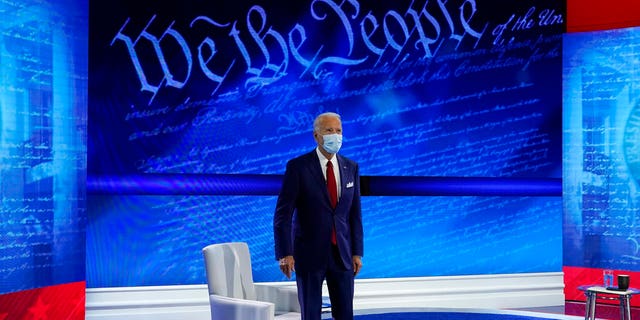 President Trump avoided wearing a mask in public until July and continues to resist any forceful urging of Americans to wear masks. At last month's first presidential debate, Trump once again mocked Biden for wearing a mask, saying that "I don't wear a mask like him. Every time you see him, he's got a mask. He could be speaking 200 feet away from him and he shows up with the biggest mask I've ever seen."

Biden on Thursday reiterated that the "words of the president matter, no matter if they're good, bad or indifferent, they matter. And when a president doesn't wear a mask or makes fun of people like me when I was wearing a mask for a long time, then people say 'well, it mustn't be that important.'"

The Republican National Committee will spend $25 million on television ads in a battleground state advertising blitz beginning Tuesday and running for the final two weeks before Election Day, Fox News has learned. The RNC on Tuesday will launch television ads in a number of key states, including Arizona, Iowa, Michigan, North Carolina and Wisconsin. […]

Read More
Jeff Bridges Says He Has Lymphoma
No Comments

Jeff Bridges, the actor known for his roles as Bad Blake in "Crazy Heart" and The Dude in "The Big Lebowski," announced on Monday that he has lymphoma. "Although it is a serious disease, I feel fortunate that I have a great team of doctors and the prognosis is good," Mr. Bridges tweeted, with a […]

Read More
Kamala Harris, Mass Incarceration and Me
No Comments

Listen to This ArticleAudio Recording by Audm To hear more audio stories from publishers like The New York Times, download Audm for iPhone or Android. Because senator Kamala Harris is a prosecutor and I am a felon, I have been following her political rise, with the same focus that my younger son tracks Steph Curry […]

DENVER -- A television station security guard accused of fatally shooting a pro-police demonstrator following opposing rallies was charged Monday with second-degree murder, according to the Denver district court clerk's office. The charges in the death of Lee Keltner, 49, were filed to the district court against Matthew Dolloff, 30, who was protecting a KUSA-TV […]