The National Weather Service (NWS) issued a red flag warning through Friday for Northern California due to dry, windy weather that could fuel blazes in the region.

"While good progress has been made on a number of fires, this could hamper containment efforts," Cal Fire assistant deputy director Daniel Berlant said in a briefing on Tuesday. "It means if a new fire breaks out, that fire is going to be able to burn very rapidly."

More than 8,500 wildfires have burned well over 6,406 square miles in California since the start of the year, but mostly since mid-August. 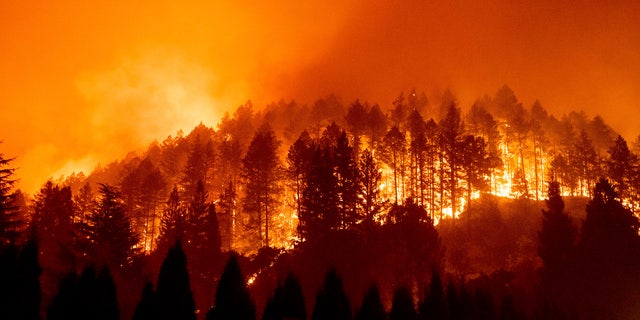 Thirty-one people have died so far this wildfire season and more than 9,200 structures have been destroyed. Fall is typically the state's peak wildfire season, but many of the blazes came much earlier in 2020.

Five of the six largest state fires were in 2020, many starting from lightning strikes that burned in largely unpopulated land. 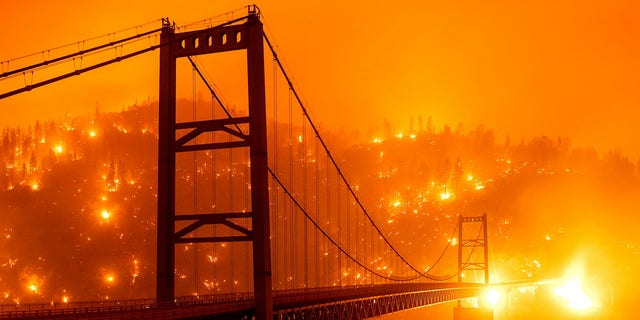 In this Sept. 9, 2020, file image taken with a slow shutter speed, embers light up a hillside behind the Bidwell Bar Bridge as the Bear Fire burns in Oroville, Calif.
(AP Photo/Noah Berger, File)

Most of the huge fires have been fully or substantially contained over the past eight weeks. But 11,500 firefighters remain still on the lines.

A dome of heat burning across the Southwest is once again helping to create conditions leading to wildfire spread.

The heat continues over California and the Southwest on Wednesday where record highs will be possible and heat advisories are in place.

A cold front moving in from the Northwest is creating conditions that could allow for Diablo winds that blow from land to sea in the northern part of California. 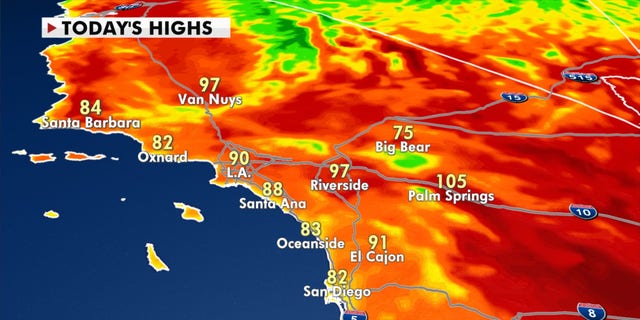 "This cold front is pretty gusty so it's going to bring the winds and the potential for more wildfire danger," Fox News Senior Meteorologist Janice Dean said on "Fox & Friends." 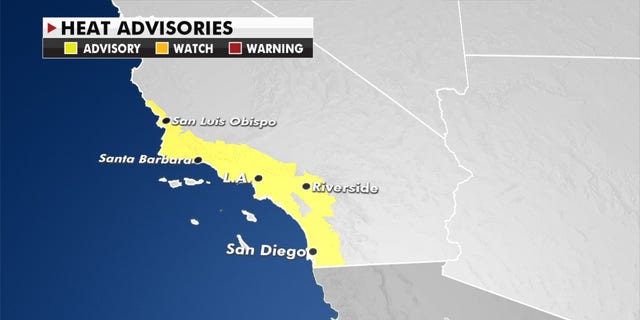 Those enjoying the warm temperatures across the Plains on Wednesday should prepare for some changes. The strong cold front is on the move that will bring in much colder air by Thursday, with some areas feeling drops of 20-30 degrees. 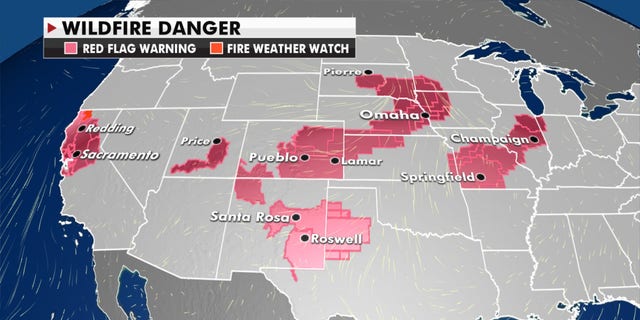 Many states across the Plains and into California are under red flag warnings with "elevated to critical" fire danger as the winds kick up and dry, warm conditions set the stage for possible wildfires. There are still 73 large wildfires burning across the West.

The threat for wildfires will continue Thursday and Friday across Southern California as heat advisories remain in effect with the threat of an offshore flow of the notorious Santa Ana winds. 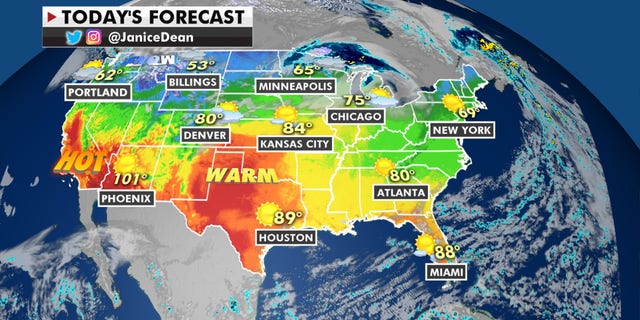 The potentially dangerous conditions have spurred the nation's largest utility to warn it may begin cutting power Wednesday evening to as many as 54,000 customers in 24 counties.

Pacific Gas and Electric Company (PG&E), which provides power to much of California, said it may implement the preemptive electricity cuts as soon as Wednesday evening in an effort to prevent fires from being started by damaged power lines fouled or knocked down in high winds.

"We really view it as a last resort option," Mark Quinlan, the company's incident commander, told The Associated Press.

The utility also has deployed generators and other measures to keep electricity flowing in some areas that might otherwise have lost power during the outages, Quinlan said.

Fox News' Brandon Noriega and The Associated Press contributed to this report.

Janice Dean currently serves as senior meteorologist for FOX News Channel (FNC). In addition, she is the morning meteorologist for FNC's "FOX and Friends" (weekdays 6-9AM/ET). She joined the network in January 2004. She is the author of several books. Her latest is "Mostly Sunny" (Harper Collins, March 5, 2019) Click here for more information on Janice Dean.

Who Is Wilton Gregory, the First African-American Catholic Cardinal?
Christina Morales
No Comments

Archbishop Gregory led the U.S. Roman Catholic Church’s response to its sexual abuse crisis and more recently has pushed for better race relations in the church. Here is what we know about him.

Read More
The Election May Hinge on Pennsylvania. Can the Polls Get the State Right?
Giovanni Russonello
No Comments

From the beginning, the president has turned mask wearing and other preventive measures into a loyalty test. He and his aides have taken the same approach inside the White House.

Uncontrolled spread of the coronavirus in northeast Wisconsin has done what little else could: subdue a city’s urge to cheer on its beloved Packers together.

A Boston ballot box was set on fire early Sunday in what appears to be a “deliberate attack,” according to local officials, who called the incident “a disgrace to democracy.” Authorities in Massachusetts have asked the FBI to investigate the blaze, which was sparked around 4 a.m. outside the main branch of the Boston Public...

Read More
With a little more than a week until Election Day, Trump and Biden make closing pitches on ‘60 Minutes.’
Sydney Ember
No Comments

Even before the “60 Minutes” interviews with the candidates aired, they attracted attention, in Mr. Biden’s case because of comments on the Supreme Court, and in Mr. Trump’s case because he walked out.