NEW ORLEANS -- Seen from above this week, the city of Lake Charles, La., made for an unsettling study in blue -- blue being the color of the tarps covering the hundreds of roofs that had been beaten by wind, shorn of shingles or punctured by flying trees.

On the ground, mounds of debris from Hurricane Laura, which devastated the area in August, lined roadsides all over Calcasieu Parish. More debris choked the drainage canals.

Yet on Thursday, weary residents of this battered oil-patch city prepared, along with the rest of southwest Louisiana, for yet another round of serious trouble spinning up from the Gulf of Mexico.

As of Thursday afternoon, Hurricane Delta, the 25th named storm of the 2020 Atlantic hurricane season, was about 345 miles from the Louisiana coast, churning slowly northwestward at 12 miles per hour on a path that could end up strafing Lake Charles again. 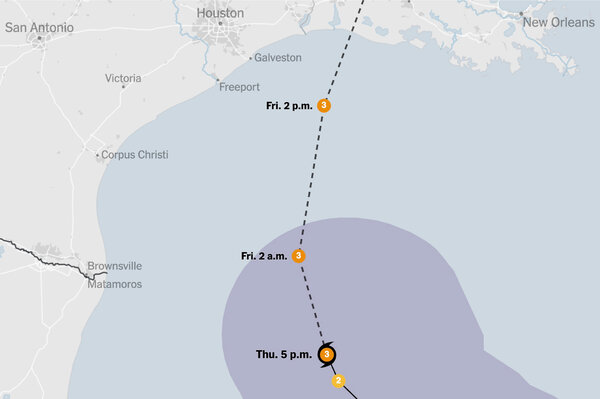 Many of those blue tarps may soon be whipped away by the wind, said Bryan C. Beam, the administrator of Calcasieu Parish, whose seat is Lake Charles. The debris along the roadsides may turn into flying projectiles. The choked-up drainage canals may overflow, creating new and dangerous flood patterns.

Electricity was finally restored in full last week -- but homes could again be plunged into darkness, he said.

Mr. Beam sounded as though he had had enough.

"It's like a boxer going in the ring a few weeks later after getting pounded," he said. "You can only take so much in a short period of time. We're a very resilient people. But it's very tough right now."

The new trouble that Hurricane Delta threatens to inflict on Louisiana comes in the midst of one of the most active hurricane seasons on record: Last month, meteorologists ran out of names after a storm named Wilfred formed in the Atlantic. Subtropical storm Alpha, the first of the 24 letters of the Greek alphabet, formed quickly thereafter, becoming the 22nd named storm since May.

Louisiana has been in the path of six major storms since June, and along with the wildfires in the West, they have brought fresh attention to the effects of climate change, which has likely contributed to the intensity of the storms and the persistence and size of the fires.

The possibility that the climate crisis may have moved the United States into a troubling new era of incessant catastrophe was discussed, for a few minutes, during Wednesday's vice-presidential debate, in which Vice President Mike Pence argued that "there are no more hurricanes today than there were 100 years ago."

On Thursday, Suzana J. Camargo, a research professor in the division of ocean and climate physics at Columbia University's Lamont-Doherty Earth Observatory, said that judging hurricane seasons by the mere number of storms misses the point. Besides the fact that the actual number of storms could not be precisely tallied before the satellite era, "just talking about numbers is a little naive," she said, because of the issues of storm intensity, rainfall and surge.

Indeed, many scientists say that several aspects of climate change are making storms more destructive. James P. Kossin, a researcher with the National Oceanic and Atmospheric Administration, called the discussion of the number of storms a "red herring" since the trend toward more destructive storms is the more important factor. Climate change may even be reducing the number of weak storms through factors like increased wind shear.

Hurricane Delta has already ravaged southeastern Mexico near the tip of the Yucatan Peninsula, making landfall there early Wednesday. The storm knocked out power, felled trees, shattered windows, and caused scattered flooding in cities and towns along the Caribbean coast. But regional and federal officials said they had received no reports of deaths.

As Delta crossed the peninsula and moved into the Gulf of Mexico on Wednesday, visitors and residents of the region breathed a sigh of relief that it had delivered a lesser punch than many there had feared.

The hurricane, which had grown to a Category 4 before weakening, is expected to strengthen again and make landfall along the Louisiana coastline on Friday afternoon or evening, said Dennis Feltgen, a meteorologist and spokesman for the U.S. National Hurricane Center. It could bring between five and 10 inches of rain.

Hurricane conditions and a life-threatening storm surge were expected along a wide swath of the northern Gulf Coast. A hurricane warning was in effect from High Island, Texas, to Morgan City, La., and wind and storm surge warnings and watches were in place for several more areas, the National Hurricane Center said.

Life is still not back to normal along swaths of the Gulf Coast, which was heavily battered by Laura in late August and Sally in September. Those storms had caused extensive property damage and several deaths.

As of Thursday morning, 6,500 Hurricane Laura evacuees remained sheltered across Louisiana, with another 2,071 in Texas hotels, according to a spokeswoman with the Louisiana Department of Children and Family Services.

Janice Duren, 47, was one of thousands of evacuees from Lake Charles who boarded a state-sponsored bus out of Laura's path. She landed at the Hilton Riverside in New Orleans, where she has been trapped in a kind of limbo, bouncing between phone calls with various government agencies, insurance companies and nonprofit groups.

Two trees fell through the Lake Charles-area home she shares with her husband, and she has been left with nowhere to go and a dwindling bank account.

"And we're fixing to get hit again. You might as well hang it up," Ms. Duren said. "It looks like somebody put a bomb off down there," she said of Lake Charles.

"And you turn around and put another hurricane on top of that?" she added. "It'll be double the trouble, but we don't have half the help we need."

Hurricane Delta has upended college football, which has delivered a welcome hint of normalcy to the Gulf States in a year made abnormal by the persistence of the coronavirus crisis.

Gov. John Bel Edwards of Louisiana and Gov. Kay Ivey of Alabama both declared states of emergency on Tuesday, and Mr. Edwards said on Wednesday that President Trump had approved Louisiana's request for federal emergency declaration before the storm hit. The declaration authorizes FEMA Public Assistance to support the state's response to Hurricane Delta.

In Mississippi, emergency officials have sent 160,000 sandbags to several counties along the Gulf Coast including Harrison, Hancock and Jackson Counties, and said there were nine shelters ready to open if needed.

The latest models show that Mississippi may not get the worst of Delta. Last month, Hurricane Sally demonstrated how unpredictable big storms can be: Gulf residents were on high alert as far west as New Orleans, but Sally ended up making landfall in Alabama -- and causing severe damage to the Florida panhandle.

It was a tiring reality that informed the wisdom imparted by Gov. Tate Reeves of Mississippi as he also declared a state of emergency this week. "Prep for the worst," he said. "Pray for the best."