President Trump's running mate - campaigning Wednesday in Grand Rapids - had a message for supporters: "In the next 20 days, or on Election Day, I need you to vote, Michigan."

Michigan - along with Pennsylvania and Wisconsin - had been carried by Democrats in presidential elections for a quarter century before Trump narrowly edged 2016 Democratic nominee Hillary Clinton in all three states four years ago, helping him win the White House. 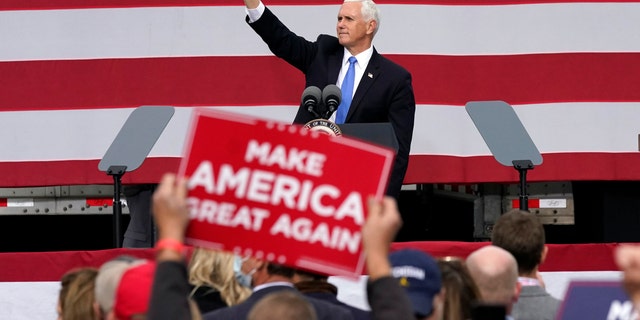 But as Pence arrived in Michigan, a new public opinion poll released by EPIC/MRA indicated Democratic presidential nominee Joe Biden leading Trump 48%-39% among likely voters. The survey, conducted Oct. 8-12, is pretty much in line with other polls conducted in October, which put Biden's lead in Michigan in the 6-10 point range.

Four years ago, an average of the polls on the eve of the election indicated Clinton with a 3.6 point edge. But Trump ended up carrying the state - and its 16 electoral votes - by just three-tenths of 1%.

Trump held a slight two-point edge over Clinton on the eve of the 2016 election in the neighboring battleground of Ohio - but he ended up defeating her by 8 percent. The state wasn't considered to be in play at the start of the 2020 presidential election cycle, but Ohio's 18 electoral votes are currently very much up for grabs.

A Quinnipiac University poll released Wednesday indicated the former vice president at 48% among likely voters and Trump at 47%. Biden's one-point edge is well within the survey's sampling error, suggesting the race is basically tied.

"It's a nail biter in Ohio four years after the Buckeye State delivered a decisive win for Donald Trump. Joe Biden and Trump remain locked in a race that is too close to call, and the needle hasn't budged with each candidate sitting exactly where they were in late September," Quinnipiac University polling analyst Mary Snow emphasized.

The Quinnipiac poll was conducted Oct. 8-12. A New York Times/Siena College survey in the field just a few days earlier also showed Biden with a slight one-point edge over the president.

It's been nearly three decades since a Democrat carried Georgia in a presidential election. You've got to go back to 1992, when then-Arkansas Gov. Bill Clinton won the state.

President George W. Bush trounced Democratic nominee Sen. John Kerry by 17 points in Georgia in the 2004 election, but Republican margins have been narrowing since then, and Trump topped Clinton by just five points in 2016.

"Warning lights are blinking red and alarms are going off in the Peach Tree state," Quinnipiac University polling analyst Tim Malloy said.
But other public opinion polling conducted in Georgia this month shows a much closer contest between Biden and the president.

Hoping to hold on to Georgia, the Trump campaign announced this week that the president would hold a campaign rally in the city of Macon on Friday. While Biden hasn't campaigned in Georgia during the general election, his wife Jill Biden held events in the state on Monday and the former vice president's campaign is up with a final $4 million ad-blitz in the state, where 16 electoral votes are up for grabs.

Trump led Clinton by less than a point in neighboring North Carolina in an average of the final surveys on the eve of the election four years ago. But he ended up winning the state and its 15 electoral votes by 3.6 points.

New Hampshire's been a general election battleground state for a generation - and four years ago Trump lost the state to Clinton by less than 3,000 votes. A Suffolk University poll for the Boston Globe conducted a few days before the 2016 election indicated Clinton and Trump deadlocked.

Fast forward four years and a new Suffolk University survey for the Boston Globe that was released on Wednesday indicates Biden with a 51%-41% lead over Trump in the Granite State. The two other public opinion polls conducted this month in New Hampshire also indicated Biden with a double-digit lead in the battle for the state's four electoral votes.

In a conference call Monday with reporters, the Trump campaign downplayed the current public opinion surveys and spotlighted their own internal polling.

"The enthusiasm in the states are very real," senior adviser Corey Lewandowski said. "We feel very good with our polling numbers."