McSally, who was appointed by Gov. Doug Ducey after she lost a different seat to Democratic Sen. Kyrsten Sinema, is now in a tight race against Kelly, the astronaut husband of former Rep. Gabrielle Giffords.

She has attempted to rally voters to her side by arguing that Kelly has problematic business ties to China, a claim that Haley echoed Monday while stumping at an event in Scottsdale.

China is the largest geopolitical threat to the United States, the former diplomat and South Carolina governor said, and Kelly's alleged interactions with firms in the Communist nation should be disqualifying.

STATE OF THE 2020 BATTLEGROUNDS: CAN BIDEN SNAP GOP'S WINNING STREAK IN GEORGIA?

According to The Associated Press, Kelly had co-founded a high-altitude balloon company in Tucson that received funding from Chinese investment firm Tencent Holdings. Though the former NASA astronaut no longer works for the firm, his financial disclosures reportedly show he retains an equity stake.

In addition, while an astronaut, Kelly was involved in a forum for young leaders from both countries. After retiring, he also pitched vitamins for a Chinese company.

"I want to know that we're going to send a senator from Arizona to D.C. that understands China is a national security threat, not someone who wants to hold their hand and figure out how to get them to invest in his company," she said. 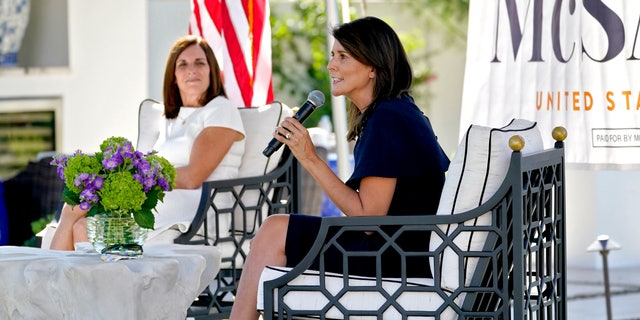 Kelly has waved off questions about his ties to China -- including during last week's first and only debate -- calling them "false, negative attacks trying to attack [his] patriotism."

The Democrat has pointed to a memo calling on Republican Senate candidates to blame China for the pandemic and asserted that he's "known China as an adversary my entire adult life."

"It doesn't matter who Sen. McSally gets to repeat her lies, they are still lies, and they won't distract Arizonans from her record of voting over and over again to undermine protections for people with pre-existing conditions," Jacob Peters, a Kelly campaign spokesperson, told AZ Central, referring to a popular portion of the Obamacare law, which Republicans have fought to repeal.

With the closely watched race in a dead heat -- much like the presidential standings in the battleground -- Haley appealed to voters McSally seems to be missing: women.

McSally urged her supporters to ignore what she said were "fake polls," which have fairly consistently shown her trailing Kelly over the past few weeks.

LOUISVILLE, Ky. -- A Kentucky judge on Tuesday granted grand jurors in the Breonna Taylor case permission to speak publicly, a rare move that immediately led one juror to assert that prosecutors had not given the panel the opportunity to bring homicide charges in the case. Ms. Taylor, 26, was killed in her apartment in […]

Hi. Welcome to On Politics, your guide to the day in national politics. I'm Nick Corasaniti, your host on Tuesdays for our coverage of all things media and messaging. Sign up here to get On Politics in your inbox every weekday. Image Until a month ago, the biggest-spending Democratic super PAC in the general election […]

Read More
U.S. Government and Tech Firms Push Back on Russia (and Trump)
No Comments

The lack of a required night patrol aboard a scuba dive boat delayed the response to a fire that killed 34 people last year, the National Transportation Safety Board said on Tuesday. The delay allowed the fire to grow unnoticed and "directly led to the high number of fatalities," the board said. A lack of […]

President Trump on Tuesday called on William P. Barr, the attorney general, to take action before Election Day against his Democratic opponent, former Vice President Joseph R. Biden Jr., over his son's foreign work, an extraordinary attempt to pressure the government's chief law enforcement to help him politically. The president made the remark during an […]