An out-of-control boat in Florida ended up making a crash landing after going airborne over a dock in a moment that resembled a scene out of an action movie.

The Martin County Sheriff's Office said the wild scene unfolded Friday after three men said they were doing a "photo shoot" aboard the 24-foot vessel in the St. Lucie River when they somehow fell overboard.

The incident unfolded in the late-afternoon just south of the Stuart Causeway in Stuart.

After the group of men fell out of the boat, the unmanned vessel continued to circle them as they tried to stay afloat in the river. 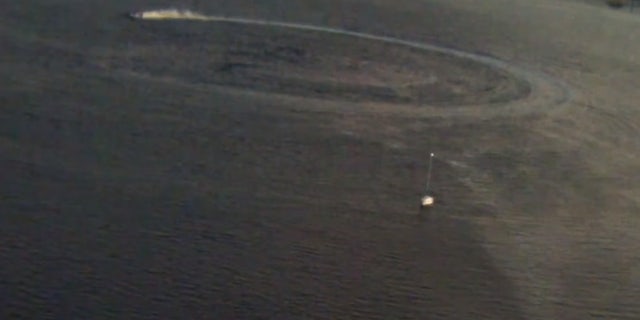 Three men who fell off the boat were then circled by the runaway vessel, forcing them to dive underwater to avoid serious injuries.
(Martin County Sheriff's Office)

"The three male occupants told MCSO marine deputies that they were forced to dive underwater numerous times because the boat continued to circle around, nearly running them over," the sheriff's office said.

The out-of-control vessel eventually straightened itself out - then traveled at a "high rate of speed," racing toward a concrete dock near the 1500 block of St. Lucie Boulevard in Stuart.

Footage released by the sheriff's office shows the boat hitting the dock, going airborne, and then coming to rest after smashing into another dock. 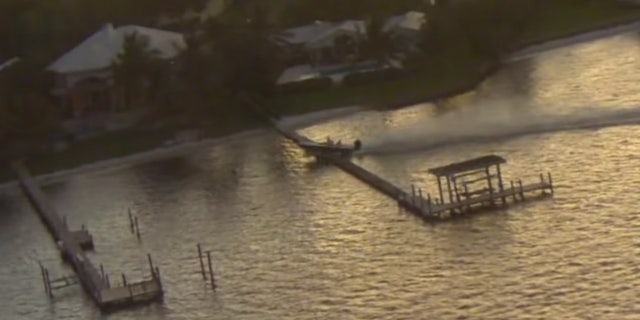 The out-of-control boat made a crash landing after going airborne over a dock in Stuart, Fla. on Friday.
(Martin County Sheriff's Office)

The three men were able to swim to a nearby sailboat and avoided serious injuries. 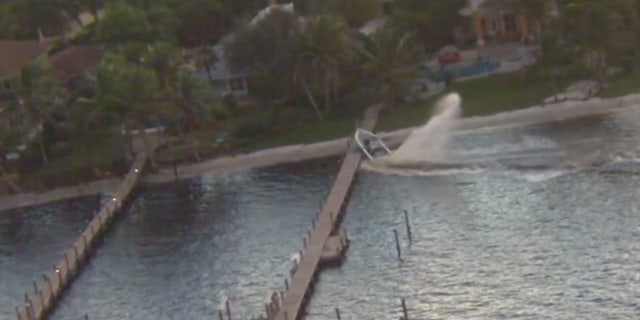 The out-of-control boat made a crash landing after going airborne over a dock in Stuart, Fla. on Friday.
(Martin County Sheriff's Office)

"One of the men suffered minor injuries," the sheriff's office said.

An investigation into the cause of the incident was turned over to the Florida Fish and Wildlife Conservation Commission, which investigates boating accidents.

A man arrested in North Carolina and being held in jail on child pornography charges allegedly also was plotting to carry out an act of terrorism, including an assassination attempt on Democratic presidential nominee Joe Biden.

A closely-watched congressional district in southwestern Pennsylvania could be a bellwether for whether President Trump wins a second term on Nov. 3.

Partisan politics have found their way into elections across the country as Election Day draws nearer and the GOP-controlled Senate pushes to confirm Amy Coney Barrett to the Supreme Court just days before Nov. 3.

Sen. Ted Cruz, R-Texas slammed the mainstream media on Thursday for ignoring the ongoing scandal surrounding Hunter Biden’s overseas business interests, saying they were "not even pretending to do their job" to address the story.

A group of trailer park tenants in Colorado received an alleged letter from their landlord telling them their rents would “most likely” double if Joe Biden beats President Trump on Election Day, according to local reports.

Colorado’s Secretary of State’s office announced that more than 1.2 million voters have already cast their ballot with two weeks remaining until the Nov. 3 election.