Two Seattle homeowners with a "Thin Blue Line" flag outside their house were targeted in drive-by shooting on Friday, police confirmed to Fox News.

Surveillance footage obtained by KIRO-TV shows a vehicle firing nine shots at a home in North Seattle before speeding away. 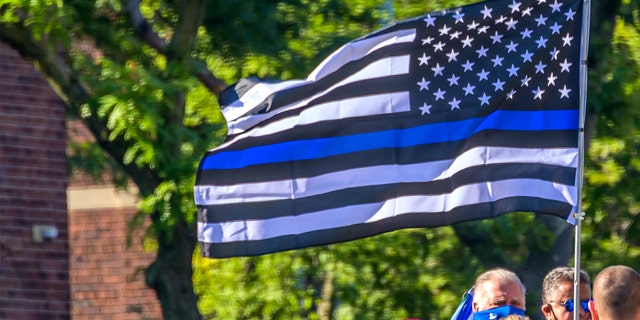 The owners of the home are two grandparents who have reportedly lived in the neighborhood for more than 30 years. The couple told the station they believed they were targeted because of the flag, which is meant to convey support for law enforcement.

The man said "about twice a week" he argued with people who made "derogatory remarks" and told him to take down the flag.

"I didn't argue with anybody," he said.

"ACAB," which stands for "All Cops Are Bastards" and "Black Lives Matter" have also been spray-painted outside their home, according to the station.

Seattle police have thanked the couple for their support but have advised them to take it down for their own safety.

"Everybody has an opinion and we're entitled to it," the woman said. "You don't shoot me for it!"

The couple has declined to reveal their identities for fear of retaliation.

Seattle police told Fox News that there have been no arrests in the shooting. Police are asking anyone with information on the suspect to contact them.