The Supreme Court on Thursday blocked enforcement of federal government restrictions for women seeking access to an abortion drug during the coronavirus pandemic.

The high court has returned the case to a federal trial court in Maryland for further review of the issue. Justices Sam Alito and Clarence Thomas dissented. 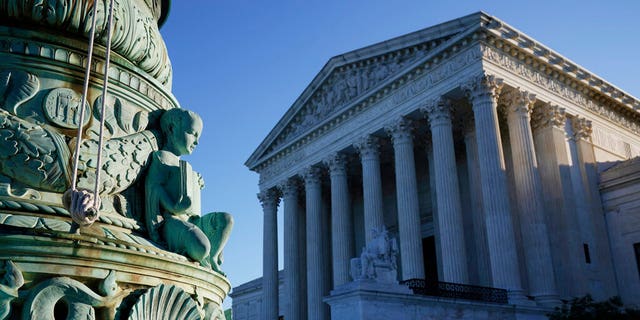 The Supreme Court is seen in Washington, Monday, Oct. 5, 2020, as the justices begin a new term following the recent death of their colleague, Ruth Bader Ginsburg.
(AP)

The ruling comes nearly three months after a federal judge in Maryland ruled that, during the coronavirus pandemic, health care providers can arrange for mifepristone to be mailed or delivered to patients. The FDA has approved mifepristone to be used in combination with a second drug, misoprostol, to end an early pregnancy or manage a miscarriage.

Thursday's ruling from the high court is temporary in nature, while the larger legal ramifications play out in court. It comes in response to the case, "FDA vs. American College of Obstetricians and Gynecologists."

The administration is asking to be allowed to enforce a U.S. Food and Drug Administration rule. The administration has suspended similar in-person visits for other drugs, including opioids in some cases, but refused to relax the rules for getting the abortion pill.

Alito and Thomas said they would have granted the administration's request. "Six weeks have passed since the application was submitted, but the Court refuses to rule," Alito wrote.

The court called for the federal judge to take a new look at the issue and rule within 40 days - postponing any further high court action until after the November Election.