A Black man in Texas whose arrest garnered national attention after White mounted police officers were seen leading him by rope is now suing the city of Galveston and its police department for $1 million.

Donald Neely, 44, suffers from mental illness and was homeless at the time when he was arrested for criminal trespassing at the Park Board of Galveston on Aug. 3, 2019, the Houston Chronicle reported.

TEXAS ARREST WHERE HANDCUFFED SUSPECT WAS LED BY ROPE WOULD 'LOOK SO BAD,' OFFICER SAYS

Two officers "clipped" a rope to his handcuffs and led him through downtown streets to a mounted patrol staging area, the Galveston Police Department said in a statement shortly after the arrest. A transport unit wasn't immediately available at the time.

The images shared online of the two White officers leading Neely using a rope tied to his handcuffs -- reminiscent of pictures showing slaves in chains -- sparked public outrage at the time.

A lawsuit filed in Galveston County court last week by Julie Ketterman, a Houston-based attorney, argues the two officers "knew or should have believed that Neely -- being a Black man -- being led with a rope and by mounted officers down a city street as though he was a slave, would find this contact offensive." 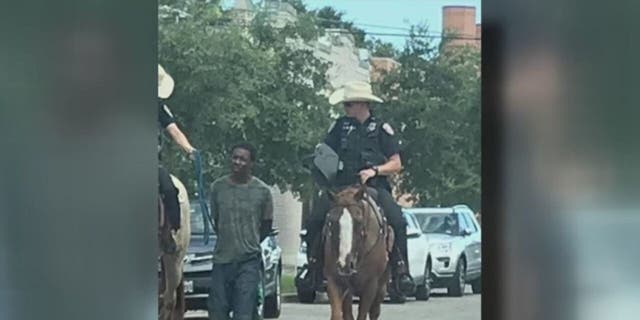 Donald Neely, 44, was arrested for criminal trespassing in August 2019 before two mounted Galveston police officers handcuffed him and led him by rope down several city blocks. (Handout)

Neely is seeking $1 million in damages for emotional distress, malicious prosecution, and negligence. He's also demanding a trial by jury.

"Neely felt as though he was put on display as slaves once were," the lawsuit states, according to KPRC. "He suffered from fear because one of the horses was acting dangerously, putting Neely in fear of being drug down the street by a run-away horse."

Galveston Police Chief Vernon L. Hale III issued an apology in the aftermath of the arrest, explaining that though the officers "showed poor judgment" and should have waited for a transport unit, they "did not have any malicious intent" and the department changed its policy of using mounted horses to transport people placed under arrest in most scenarios.

The city of Galveston did not immediately return a Fox News request for comment.

The lobbying firm Mercury Public Affairs has cut ties with the Turkish government following a pressure campaign by Armenian-American activists incensed by Turkey’s support for Azerbaijan in ongoing hostilities with Armenia. The firm’s decision to scrap its $1 million contract with Turkey is a victory for Armenia in a conflict that’s playing out in Washington […]

Social media platforms faced criticism over their handling of the New York Post's report on emails taken from a laptop purportedly belonging to Hunter Biden.

More than 63 million people tuned in to watch the second and final presidential debate Thursday, a significant drop from the over 73 million who tuned in for the first debate, according to Nielsen Media Research.

Vice President Mike Pence called on his predecessor, Joe Biden, to be frank and honest with the American people Friday about whether he was involved in or benefited from his son Hunter's overseas business interests.