Two teen girls in Utah are accused of swiping a classmate's pro-Trump hat, spitting in his face and stomping on his glasses in a high school because of his support for the president, authorities said.

One of the girls recorded a video last month as the other approached the victim and swiped his "MAGA" hat, police in West Jordan, just south of Salt Lake City, said Tuesday.

"They started ridiculing him, pushing him and stuff like that, then they actually spit on him," Sgt. J.C. Holt of the West Jordan Police Department told Fox News Tuesday. "The young man did not fight back or anything."

Authorities declined to release the students' names because of their ages, but local media identified the victim as 15-year-old Braxton McElhaney.

"The two girls, they kept antagonizing me, calling me a racist, saying I look retarded, and calling me a White supremacist, White privilege, because I was wearing my Trump hat," McElhaney told Salt Lake City-based KUTV.

He said the girls also tore off his American flag face mask and threw it in the trash during the Sept. 3 altercation.

"The way he was treated, the way that a lot of people are treated with all of this divide that we have going on in our country, it's ridiculous," the teen's father, Joe McElhaney, told KUTV. 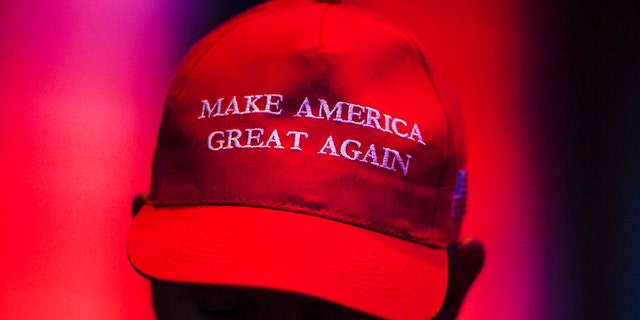 A Jordan School District spokesman did not immediately respond to a request for comment, but in a statement to local media the district condemned the actions shown in the video.

"Jordan School District does not tolerate or condone the type of behavior seen in this video," the district said. "Our schools stand for respect and inclusion where all are free to learn and work in a safe, welcoming environment without judgment."

"This situation was immediately investigated with the support and involvement of law enforcement," the statement continued. "Swift, appropriate disciplinary action was taken following district protocol."

Holt said that investigators found probable cause for charges against the girls in the case, but did not yet know whether the district attorney's office planned to prosecute.

A GoFundMe fundraiser organized by Braxton's mother garnered $25,000 in a single day, well above her initial goal of $1,000.

'The two girls, they kept antagonizing me, calling me a racist'

Democratic presidential nominee Joe Biden slammed the recent reports of his son Hunter’s overseas business dealings, calling them a “smear campaign” and arguing that the information is part of a Russian disinformation campaign.

The 2020 presidential race between President Trump and former Vice President Joe Biden has seen at least 58 million people cast their ballots so far.

SACRAMENTO — Phone notifications flashing endorsements. Campaign flyers tucked into grocery deliveries. Takeout bags urging a “yes” vote. Rideshare and delivery companies are not only spending record sums, they are wielding their own platforms and using customer data to win on Proposition 22, a November ballot measure that would exempt some gig companies from a […]

Democratic presidential nominee Joe Biden misspoke on Sunday and appeared to begin saying the name of former President George W. Bush rather than President Trump while emphasizing that the 2020 election is important "because who I'm running against."