Woman drowns in Lake Tahoe, 6 kids rescued from boat adrift after father jumps in to save her

A woman drowned in Lake Tahoe on Friday night during a family outing, despite the efforts of her husband to save her, authorities said.

The Tahoe Douglas Fire Protection District said the incident happened around 5:30 p.m. near Zephyr Cove on the California-Nevada border.

The woman, who has not yet been identified, jumped from a boat into the frigid water to swim but then became distressed and asked for help, according to officials.

Her husband jumped in with a life vest on to try to help her. Officials said the boat then floated away with the couple's six children aboard. 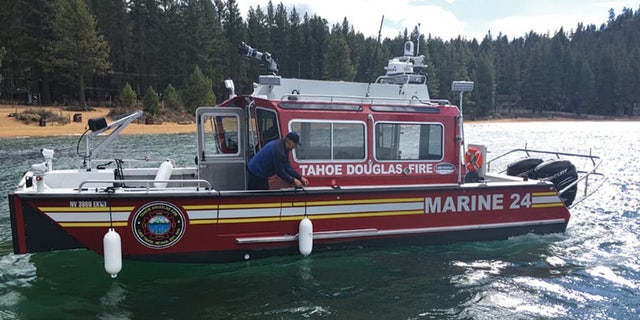 A woman drowned in Lake Tahoe late Friday and 6 children were rescued from a boat that drifted away after their father jumped in to help.
(Tahoe Douglas Fire Protection District)

"The boat was adrift with six kids on board in middle of Lake by Zephyr Cove," rescue officials tweeted.

The boat was found around 9 p.m. after people heard the children on board yelling for help, officials told FOX40. The father was later found suffering from "severe hypothermia."

All were taken to area hospitals for treatment after suffering from varying degrees of hypothermia.

The woman's body was found just after 9 p.m. Rescuers attempted to resuscitate her but the efforts were unsuccessful and she was pronounced dead.

It's not yet known why the father could not get back on the boat after jumping into the lake.

The incident remains under investigation.

GOP Senate candidate Daniel Gade, of Virginia, took in a $2.5 million fundraising haul in the third quarter of 2020, a seven-figure improvement over earlier totals and the first time he has raised more than incumbent Democratic Sen. Mark Warner, who raised $2.2 million. News of the campaign's new fortunes comes with just two weeks […]

EXCLUSIVE: President Trump's campaign Thursday will take over YouTube's masthead for 24 hours, controlling the prime internet real estate on the day of final debate between Trump and Democratic nominee Joe Biden, Fox News has learned. The Trump campaign will feature several ads on YouTube's homepage throughout the ad buy period, including two from Ultimate […]

Joe Biden is keeping a low profile ahead of Thursday's presidential debate both because he doesn't have the "stamina" to actively campaign and is afraid of questions about potential corruption involving himself and his son Hunter, Eric Trump claimed on "Hannity" Wednesday. "Something is off with that," the president's son told host Sean Hannity. "In […]