President-elect Joe Biden has decided on a Treasury secretary nominee and said he'll make the announcement around Thanksgiving - calling his choice "someone who I think will be accepted by all elements of the Democratic Party."

But Biden also took aim at President Trump for refusing to concede the presidential election, while taking questions from reporters Tuesday after he and Vice President-elect Kamala Harris held a virtual meeting with a bipartisan group of governors. He accused Trump of stalling the transition between administrations.

The president is being "totally irresponsible" and is sending an "incredibly damaging message" to the rest of the world, Biden said.

BIDEN WARNS OF ANOTHER 200,000 DEAD FROM CORONAVIRUS BY INAUGURATION

Asked about the president's invitation for a meeting with Republican legislative leaders from Michigan at the White House, Biden emphasized, "we won Michigan. It's going to be certified."

Trump is trying to reverse Biden's projected victories in that state and other key battleground. Biden stressed, "it's outrageous what he's doing." 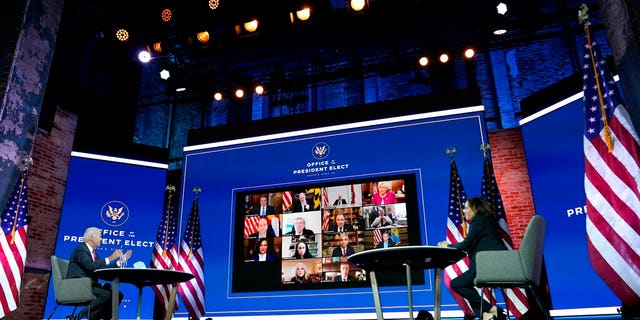 The Biden-Harris meeting with the governors focused on the battle to combat the coronavirus pandemic, which has surged again across the nation in recent weeks with spike in new cases. The nation passed a grim milestone on Wednesday: topping a quarter of a million deaths from COVID-19 since the pandemic swept the country in February and March.

Biden said that an "implementation of a national mask mandate" was discussed. "It's not a political statement. It's a patriotic duty."

Thanksgiving Poll: 53% of Parents Say 'Very Important' for Children to Visit Family, 35% Say Worth the Risk of Virus Exposure
No Comments

Mott reported on its poll, which surveys parents with children 0 to 12 years old: Some parents describe competing and overlapping priorities for Thanksgiving 2020, with over half indicating it is very important that their child sees extended family (53 percent) and shares in family holiday traditions (58 percent), and three-quarters say it is very […]

In an interview with The Breakfast Club radio show, Obama ranted about the huge level of support Trump received in the November 3 presidential election from Hispanic Americans. According to exit polling, Trump won 32 percent of Hispanic Americans. "But there's a lot of evangelical Hispanics who, you know, the fact that Trump says racist […]

Read More
Biden Urges Unity: 'We're at War With the Virus, Not With One Another'
No Comments

WASHINGTON -- President-elect Joseph R. Biden Jr. on Wednesday delivered a raw but optimistic address to Americans in his first nonpolitical speech since winning the election, pleading with the nation to "hang on" and have hope even with the number of coronavirus cases spiking across the country and a hard winter on the horizon. "Looking […]

WASHINGTON -- With the Trump administration having authorized the beginning of the formal transition process, President-elect Joseph R. Biden Jr. is slowly naming the individuals he hopes will guide him through his first term as president and help shape his thinking in the years ahead. Mr. Biden has chosen cabinet nominees who are career officials […]

Read More
James D. Wolfensohn, Who Led the World Bank for 10 Years, Dies at 86
No Comments

James D. Wolfensohn, who escaped a financially pinched Australian childhood to become a top Wall Street deal maker and a two-term president of the World Bank, died on Wednesday at his home in Manhattan. He was 86. His daughter Naomi Wolfensohn confirmed the death. Mr. Wolfensohn was a force on Wall Street for years, helping […]