In a statement released Friday, McSally wrote that she had called Kelly to congratulate him on his win and offered support during the transition of the Senate seat.

WHO IS MARTHA MCSALLY? WHAT YOU NEED TO KNOW ABOUT THE ARIZONA SENATOR

She also thanked Republican Gov. Doug Ducey for appointing her to the Senate despite losing the battle for the other Arizona Senate seat to Democrat Kyrsten Sinema during the 2018 midterm elections.

"I will always be inspired by the strength, resilience, innovation, and compassion that I witnessed from Arizonans as I traveled throughout our great state. I will never forget what I learned from all of you," she said. 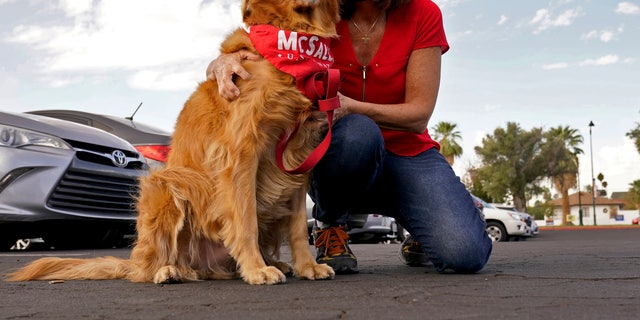 "While falling short, I am deeply humbled to have received the second most votes ever cast by Arizonans for a statewide race. I am thankful for the more than 1.6 million Arizonans who voted for me and everyone who dedicated their time, resources, and prayers to our campaign," wrote McSally.

"After fighting for our country for more than three decades--the last nine in the political arena--I trust God will lead me to my next mission to make a difference after I get a little rest," McSally concluded. "Thank you, Arizona! It's been an honor to serve you, and I know our future is bright and blessed."

McSally is the first woman in U.S. history to fly a fighter jet in combat as well as the first to command a fighter squadron.

She began her career in politics in 2012, winning the race for the Grand Canyon State's second district. She won again in 2014 in an extremely tight contest and defeated Democratic opponent Matt Heinz in 2016.

The special election garnered national attention as Democrats orchestrated an effort to flip the Senate, quickly becoming one of the most expensive races for the upper chamber in modern history.

Arizona was one of a couple of states that saw increased support for Democrats this year after voting in favor of President Trump four years ago.

Cuomo stands up for President Trump on media bias
No Comments

New York Gov. Andrew Cuomo defended President Trump this week as the three-term Democratic governor indicated the media did not treat the president with the respect that the office commands. Cuomo said during an interview with WAMC radio Monday that the press has taken on a "nastier tone," which he has noticed at his press […]

Secretary of State Mike Pompeo dismissed former Defense Secretary Jim Mattis' criticism of the Trump administration's "America First" foreign policy approach as "dead wrong" on Tuesday. "I have a lot of respect for Jim, but he's just dead wrong on that," Pompeo told "Special Report" host Bret Baier. "'America First' has been at its heart, […]

Republican upstart John James conceded on Tuesday evening and congratulated Democrat Gary Peters for winning his second term as Michigan's junior senator. "Today I believe it is the right thing to do to congratulate Sen. Peters," James, a military veteran, said in a video posted on Twitter. "Senator, you may not remember this, but you […]

President-elect Joe Biden said outreach from the Trump administration has been "sincere," since the General Services Administration ascertained his win on Monday. GSA Chief Emily Murphy gave the OK for Biden's team to access transition resources Monday, allowing the formal transition of power to begin, ending a stand-off in which the Biden team accused the […]

Carole Baskin has some cleaning up to do. The zoo formerly owned by Tiger King star Joe Exotic -- and now controlled by his nemesis Carole Baskin -- was vandalized with graffiti and trashed with rotting meat and garbage, according to a report. Baskin is accusing Exotic's business partner, Jeff Lowe, for the damage. Lowe […]