A fast-moving wildfire driven by gusting winds destroyed several homes in Reno, Nev., and forced hundreds to evacuate on Tuesday, prompting Gov. Steve Sisolak to declare a state of emergency.

The Pinehaven Fire burned an estimated 1,200 acres and threatened as many as 500 homes in southwest Reno before forward progress was stopped, Reno Fire Chief David Cochran said. He said "multiple" homes had been lost but couldn't say how many pending a daylight assessment on Wednesday.

The Reno Fire Department posted photos of firefighters battling the blaze, showing at least two homes engulfed in flames. Meanwhile, the Reno Gazette Journal reported that one of its photographers had seen at least five homes burn. 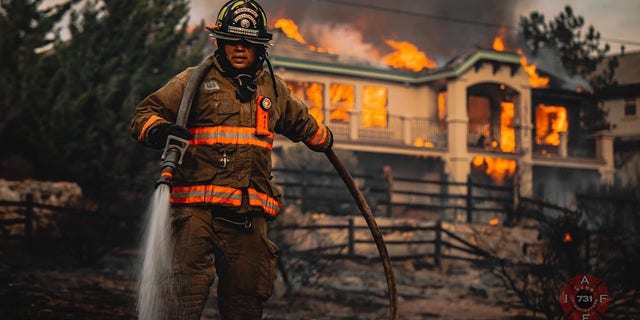 A firefighter helps to battle a blaze that engulfed a home in a Reno neighborhood on Tuesday.
(Reno Firefighters)

Cochran said teams from fire departments in Reno and California responded to help battle the fire overnight in what he described as "an extremely dynamic situation."

"Precipitation is expected, but we're not relying on that," he said. "We are working to protect homes to the extent that we can."

There were no immediate reports of injuries, and the cause of the fire was under investigation. 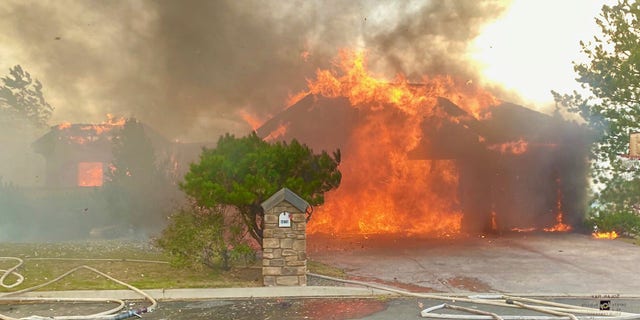 A wildfire destroyed several homes in a Reno neighborhood on Tuesday.
(Reno Firefighters)

Sisolak declared a state of emergency to ensure the necessary resources are available for the affected communities.

"I want to thank all the first responders, local government agencies and nonprofit entities who have already stepped up to assist the community during this emergency event," Sisolak said. "This truly reflects Nevada's Battle Born spirit and our commitment to caring for one another in times of need."

Authorities cut power to about 7,000 customers as a precaution, and several roads were closed. School buildings in the area were closed and online classes were canceled Wednesday, KOLO-TV reported. 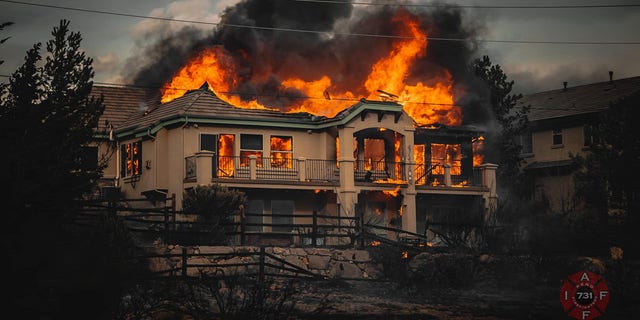 The Pinehaven Fire was one of four fires threatening the area.

Crews north of Reno battled a brush fire that broke out along the California-Nevada line and forced the closure of State Highway 70 near Vinton and Chilcoot, Calif. Another fire about 100 miles to the south exploded in size after breaking out around noon Tuesday in California's Mono County near the Nevada border, forcing evacuations in Walker and other nearby towns.

Firefighters had stopped a smaller fire that broke out near Spanish Springs, the Gazette Journal reported.

Republican congressional candidate Mariannette Miller-Meeks leads Democrat Rita Hart by a mere six votes after a recount in Iowa's 2nd District. A state canvassing board is expected to meet Monday, the legal deadline, to certify the results of the race in which more than 394,400 votes were cast. IOWA DEMOCRATS SAY FINDINGS OF INVESTIGATION INTO […]

The Pennsylvania Supreme Court has tossed out an election lawsuit to delegitimize mail-in ballots, but Republican congressional candidate Sean Parnell said his team will on Sunday ask the U.S. Supreme Court to review the case, which questions the constitutionality of Pennsylvania's Act 77. Gov. Tom Wolf signed Act 77 into law in October 2019, administering […]

Read More
Loeffler blasts Warnock as 'radical,' claims Democratic win in Georgia runoff would lead US toward socialism
No Comments

Sen. Kelly Loeffler, R-Ga., painted her Jan. 5 runoff election against Democrat Raphael Warnock as a battle against socialism during an interview on Fox News' "Sunday Morning Futures." Loeffler, whose race is one of two in the Peach State that will determine which party controls the chamber at the outset of President-elect Joe Biden's Democratic […]

White House coronavirus response coordinator Deborah Birx said on Sunday that she is "deeply concerned" about an increase in cases of the deadly contagion following the Thanksgiving holiday. "If you look at the second wave, we had less than 25,000 cases a day, we had way less mortality. We're entering this post-Thanksgiving surge with three, […]

New York City Mayor Bill de Blasio said Sunday that the city's public schools will reopen on Dec. 7 for 3-K, pre-K and kindergarten through fifth grade amid the coronavirus pandemic. The announcement marks a major policy reversal for the nation's largest school system, less than two weeks after de Blasio, a Democrat, announced that […]

President Trump told "Sunday Morning Futures" in his first interview since Election Day that the Department of Justice is "missing in action" regarding alleged election fraud. He went on to tell host Maria Bartiromo in the exclusive interview that he has "not seen anything" from the DOJ or the Federal Bureau of Investigation on investigating […]